Toulon (I Greet Thee, Who My Sure Redeemer Art) 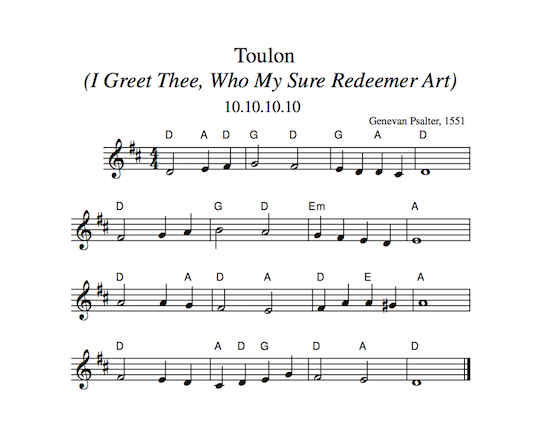 Morecambe (Spirit of God, Descend Upon My Heart) 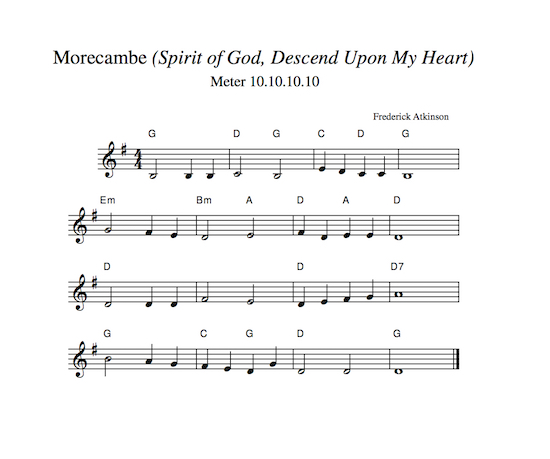 1Praise to the Lord, Give thanks, for He is good;
His love endures forever and always.
2Who can proclaim His mighty acts and deeds,
Or fully tell of all the Lord’s great praise?

3Bless’d are the ones who justice do maintain;
Who constantly do right with courage brave.
4Remember me, O Lord, when You show grace;
Come to my aid when You Your people save.

5Then I’ll, like them, enjoy prosperity,
And share with all Your people joyfully.
I’ll join with them, Your own inheritance,
And give You praise with them unendingly.

6We have all sinned, just as our fathers did;
We have done wrong and acted wickedly.
7Like them in Egypt, when they spurned Your deeds,
Forgot Your love, rebelled by the Red Sea.

8Yet He did save them for His own name’s sake,
To make His mighty power known indeed.
9He turned the Sea back, dried it up fully;
As through a desert, He then did them lead.

10He saved them from the hand of all their foes,
And He redeemed them from their enemy.
11The waters drowned their foes—not one survived;
12Then they sang praise, and His truth did believe.

13But soon they did forget what He had done;
They did not heed His counsel or His rest.
14For in the desert, they gave in to greed;
And in the wasteland, put God to the test.

15So what they asked for, He did give to them;
But sent on them unbearable disease.
16Then in the camp, their jealousy did grow;
Envy for Aaron, Moses, did them seize.

17Earth opened up, and swallowed them alive—
Dathan, A-bi-ram, and their company.
18Fire blazed among all of their followers,
And flame consumed the wicked thoroughly.

19They made a calf at Horeb’s mountain plain;
Worshipped an idol they from metal cast;
20Exchanged their Glory for an idol vain—
The image of a bull that feeds on grass.

21Thus, they forgot the God who did them save—
Who brought them out from Egypt pow’rfully,
22Who did great miracles in land of Ham,
And awesome deeds along the great Red Sea.

23He said He would destroy them in His wrath,
Had not His servant Moses intervened—
Stood in the breach and prayed on their behalf,
And from destruction all the people gleaned.

24Then they despised the pleasant promised land,
And disbelieved the promise of His word.
25They grumbled in their tents against His hand,
And willfully did not obey the Lord.

26And so He swore with His uplifted hand;
He’d make them fall within the desert land,
27Make their descendants among nations fall,
And scatter them throughout the foreign lands.

28They yoked themselves to Ba-al of Peor,
Ate sacrifices offered to vain gods,
29Provoked the Lord to anger by their deeds;
A plague broke out among them all abroad.

30But Phinehas stood up and intervened;
The plague was stopped when he did intercede.
31This was to him as righteousness applied,
For generations who would tell this deed.

32Then by the water’s flow at Meribah,
God’s anger came on Moses and on them.
33For they rebelled against His Spirit there,
And Moses spoke rash words due to their sin.

34Then they refused the nations to destroy,
As God the Lord had so commanded them.
35Instead, they mingled with the peoples there,
And followed all their customs in great sin.

36They worshipped idols, which became a snare;
37To demons, sacrificed their children there.
38Innocent blood of daughters and of sons,
They shed to Canaan’s idols without care.

39Thus, they defiled themselves by what they did;
They were like prostitutes with arrogance.
40The Lord was angry with His chosen ones,
And He abhorred His own inheritance.

41He gave them over to the nations ’round;
Their foes ruled over them like a strong tow’r.
42Their enemies oppressed them brutally,
And they subjected them to their cruel pow’r.

43Many times He delivered them and saved;
But they repeatedly rejected Him.
Bent on rebellion, they did waste away—
Wasted away because of all their sin.

44But He saw their distress and heard their cry,
45And for their sake, recalled His covenant.
In His great love He turned and did relent,
46And in their captors’ eyes, He pity sent.

47Save us, O Lord our God, from all our sins;
Gather us from the nations and their ways.
Then we will give thanks to Your holy name,
And we will find our glory in Your praise.

48Bless’d be the Lord, the God of Is-ra-el,
From everlasting and forevermore.
Let all the people say, “Amen, Amen!”
Praise to our God—all people, praise the Lord!

Psalm 1062013-10-142021-06-20https://psalms.seedbed.com/wp-content/uploads/2017/04/main-logo-transparent.pngSeedbed Psalterhttps://psalms.seedbed.com/wp-content/uploads/2017/04/main-logo-transparent.png200px200px
ABOUT US
This Psalter is a resource developed by Timothy Tennent, president of Asbury Theological Seminary, and his wife Julie Tennent to empower the church to sing the Psalms. It is published by Seedbed, whose mission is to gather, connect, and resource the people of God to sow for a Great Awakening. Read More
PERMISSIONS
All metrical versions of the psalms have been written by Tim and Julie Tennent in order to provide an open source psalter for public and private worship. Permission is granted to use these metrical settings for public worship with acknowledgement of the source. Permission is not granted for commercial use or financial charge.
NAVIGATE
SOCIAL MEDIA