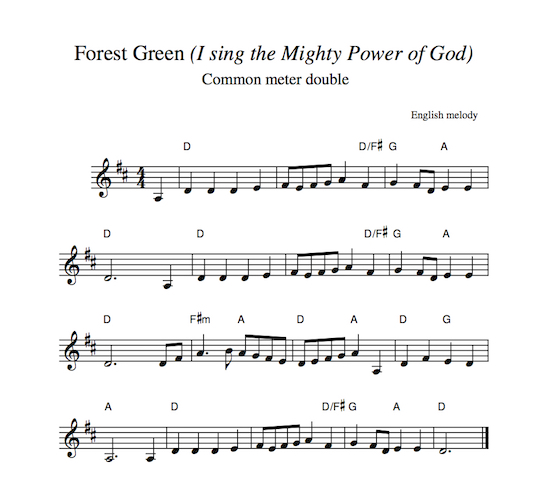 1Give thanks unto the Lord and call on His name everyone!
Make known among the nations all the wondrous things He’s done.
2Sing unto Him, sing praise to Him—tell of His wondrous deeds.
3Rejoice and glory in His name, all those who the Lord seek.

4Look to the Lord and to His strength, and seek His face always;
5Remember wonders He has done for which we give Him praise.
The miracles which His hand wrought and judgments He decreed;
6O Abraham’s and Jacob’s seed, His chosen ones indeed.

7He is the Lord our God—in all the earth His judgments stand;
8And He recalls His cov-e-nant, the words of His command.
8/9For generations vast, He keeps the cov-e-nant He made,
With Abraham and Isaac, too, the promise He conveyed.

10To Jacob, also, He confirmed the oath as His decree;
To Is-ra-el the cov-e-nant made everlastingly:
11“To you I’ll give the promised land of Canaan where you’ll live;
Your portion and inheritance I will most surely give.”

12When they were few in number and were strangers still unknown,
13They wandered from one nation to another not their own.
14He let no one oppress them, for He told kings for their sake:
15“Do not touch My anointed ones, no harm to prophets make.”

16He called down famine on the land, destroyed their food supply;
17Sent Joseph on before them, sold to slav’ry with a lie.
18They bruised his feet with shackles, put his neck in irons, too;
19Till what he’d said all came to pass; the Lord’s word proved him true.

20The king sent and released him then, the ruler set him free;
21He made him master of his house, a ruler then was he.
22He taught the princes as he pleased, instruction he did give;
23Then Isr’el entered Egypt, and in Ham did Jacob live.

24The Lord blessed all His people—they grew more than all their foes,
25Whose hearts He turned to hate His flock; His people they opposed.
26Then He sent Moses—Aaron too—His servants whom He chose;
27And they performed great miracles in Ham’s land, full of foes.

28He sent great darkness, for they had rebelled against His word.
29He turned their water into blood, their fish died by His word.
30Their homes were overrun with frogs—all bedrooms in the land.
31He spoke, and there came swarms of flies and gnats throughout the land.

32He turned their rain to driving hail with lightning all around;
33He struck their vines and fig trees, too; no untouched tree was found.
34He spoke and locusts came in droves, grasshoppers everywhere;
35They ate up every plant for food; no produce was left there.

36Then He struck down all firstborn ones, the first sons of their womb.
37He brought out Isr’el, all their tribes, with gold and silver too.
38Egypt was happy when they left, they dreaded Isr’el’s might.
39He gave a cloud for cov’ring, and a fire for light at night.

40They asked and He brought quail to them—from heaven gave them bread;
41He opened rocks and water gushed like rivers’ fountainhead.
42For He remembered promises He made to Abraham;
43He brought His people out with joy—His chosen ones from Ham.

44He gave them lands of nations that they gained by His defense—
What others toiled for, they received as their inheritance,
45That they would keep His covenant, His precepts, and His laws.
O praise the Lord, remember well; O praise Him, peoples all!

Psalm 1052013-10-142017-07-03https://psalms.seedbed.com/wp-content/uploads/2017/04/main-logo-transparent.pngSeedbed Psalterhttps://psalms.seedbed.com/wp-content/uploads/2017/04/main-logo-transparent.png200px200px
ABOUT US
This Psalter is a resource developed by Timothy Tennent, president of Asbury Theological Seminary, and his wife Julie Tennent to empower the church to sing the Psalms. It is published by Seedbed, whose mission is to gather, connect, and resource the people of God to sow for a Great Awakening. Read More
PERMISSIONS
All metrical versions of the psalms have been written by Tim and Julie Tennent in order to provide an open source psalter for public and private worship. Permission is granted to use these metrical settings for public worship with acknowledgement of the source. Permission is not granted for commercial use or financial charge.
NAVIGATE
SOCIAL MEDIA